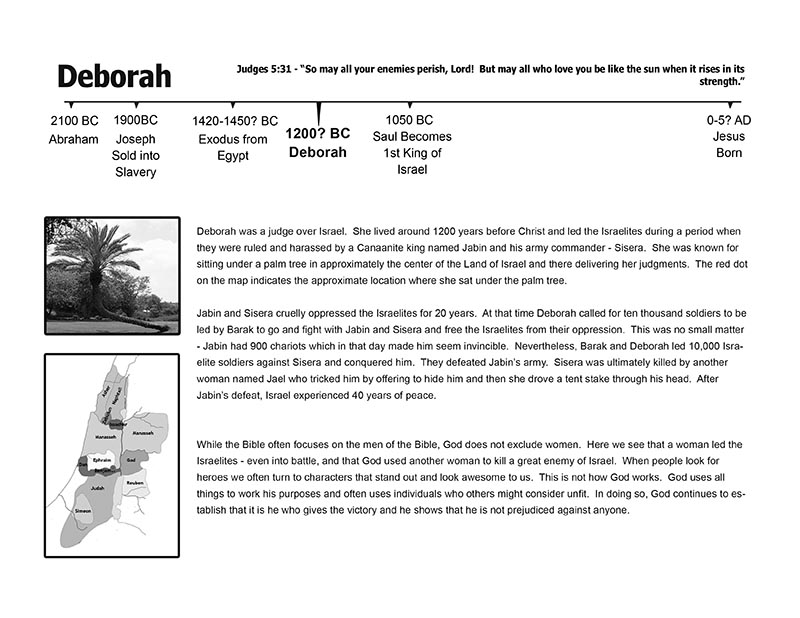 Judges 5:31 – “So may all your enemies perish, Lord! But may all who love you be like the sun when it rises in its

Deborah was a judge over Israel. She lived around 1200 years before Christ and led the Israelites during a period when they were ruled and harassed by a Canaanite king named Jabin and his army commander – Sisera. She was known for sitting under a palm tree in approximately the center of the Land of Israel and there delivering her judgments. The red dot on the map indicates the approximate location where she sat under the palm tree.

Jabin and Sisera cruelly oppressed the Israelites for 20 years. At that time Deborah called for ten thousand soldiers to be led by Barak to go and fight with Jabin and Sisera and free the Israelites from their oppression. This was no small matter – Jabin had 900 chariots which in that day made him seem invincible. Nevertheless, Barak and Deborah led 10,000 Israelite soldiers against Sisera and conquered him. They defeated Jabin’s army. Sisera was ultimately killed by another woman named Jael who tricked him by offering to hide him and then she drove a tent stake through his head. After Jabin’s defeat, Israel experienced 40 years of peace.

While the Bible often focuses on the men of the Bible, God does not exclude women. Here we see that a woman led the Israelites – even into battle, and that God used another woman to kill a great enemy of Israel. When people look for heroes we often turn to characters that stand out and look awesome to us. This is not how God works. God uses all things to work his purposes and often uses individuals who others might consider unfit. In doing so, God continues to establish that it is he who gives the victory and he shows that he is not prejudiced against anyone.